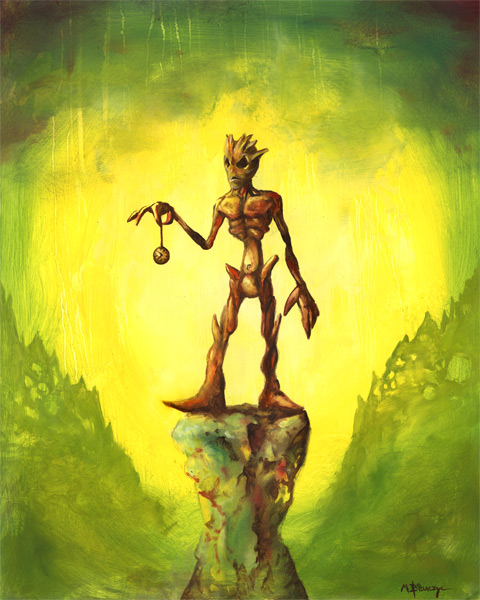 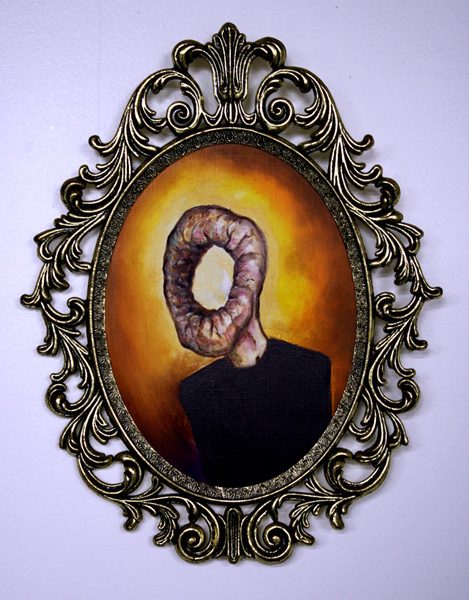 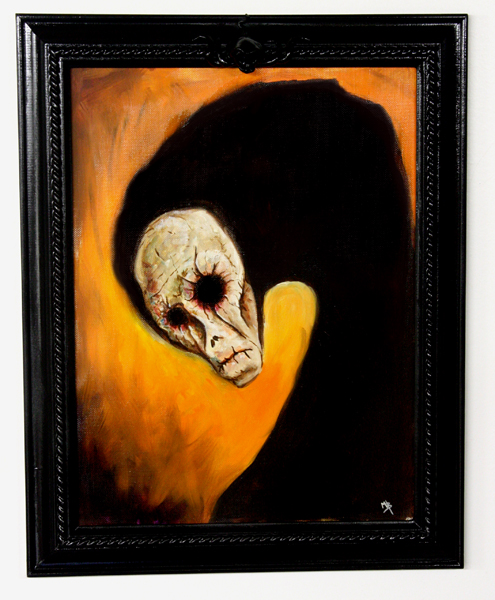 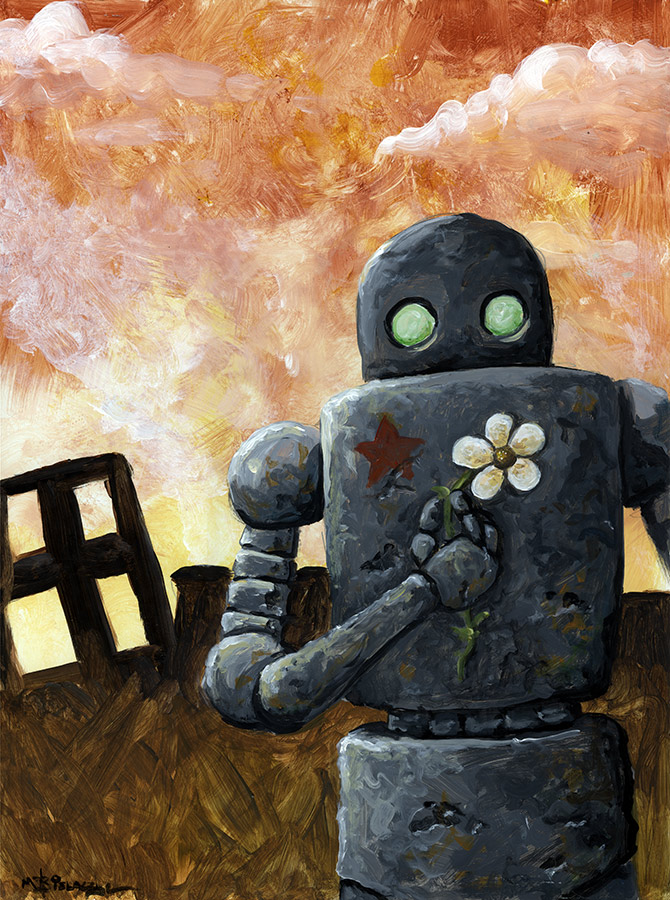 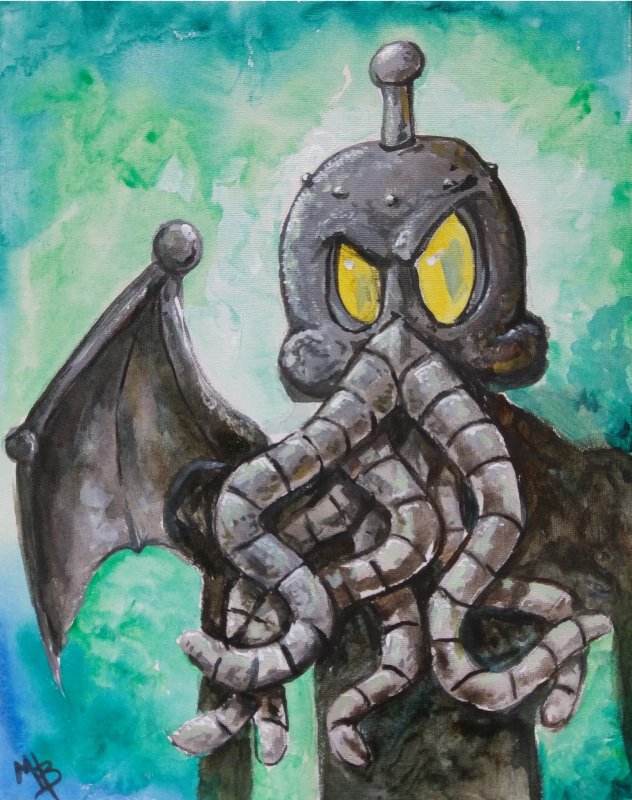 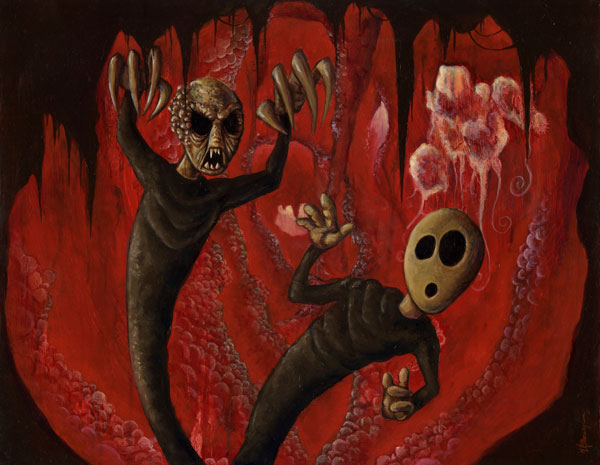 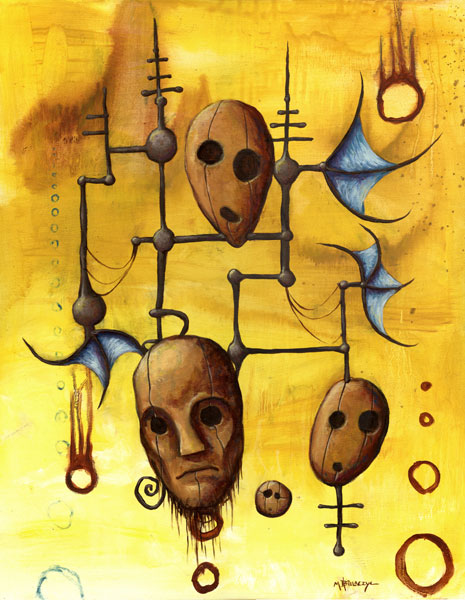 sometimes you gotta go down to go up. oil on panel, 16x20. in the collection of Grant Cooley. 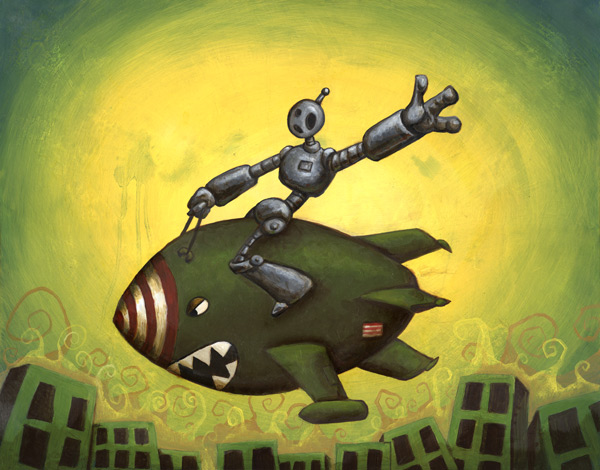 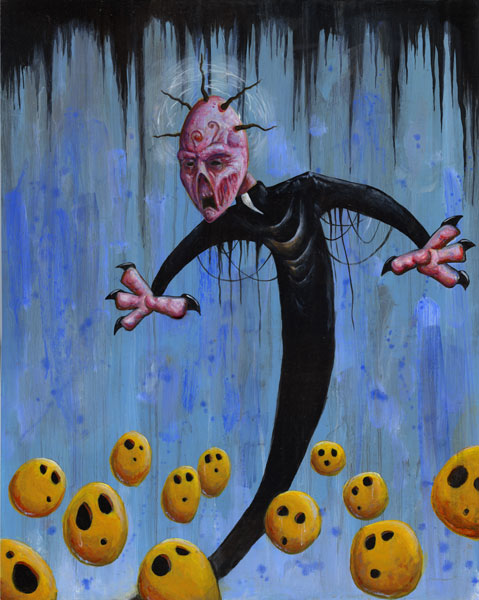 power corrupts: suffering is divine. 16x20 oil on panel. I was driving home from a show and I turned on a evangelical radio station. The preacher was talking about health care. He said that not all those who are on the earth deserve care, because suffering brings us closer to god. He said by taking away poor people's suffering, we made it harder for them to find heaven. I could not believe what I was hearing, I was so angry I immediately drew a sketch of what I thought this man may look like, which is pretty much exactly like he is in this painting, preying on the weak. As they say, power always corrupts. 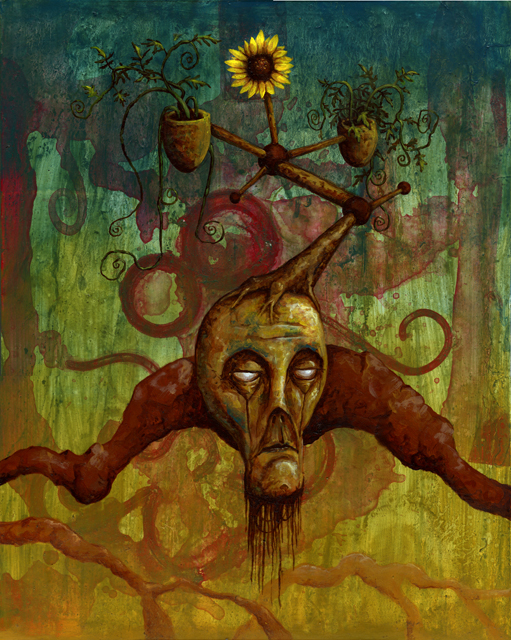 20%. 16x20. oil on panel. This painting was started last summer when i first started planting my seedling after the last frost. during that growing season, I supplied 20% of my food intake from my own garden. So when people ask me what they can do to change the world, I say get your hands dirty and grow your own food. Besides art, growing food is one of the most satisfying things I do. 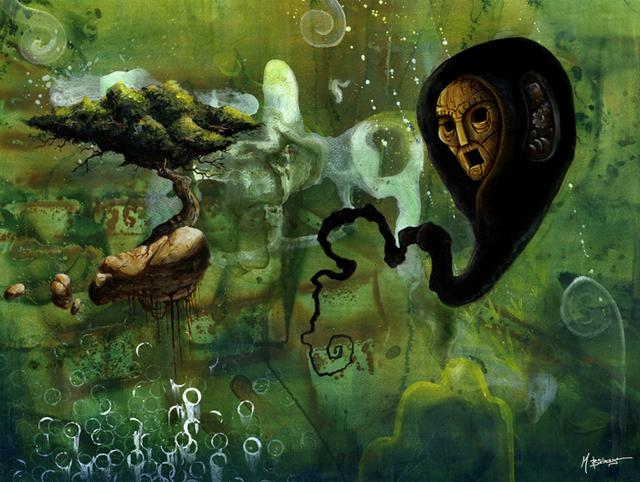 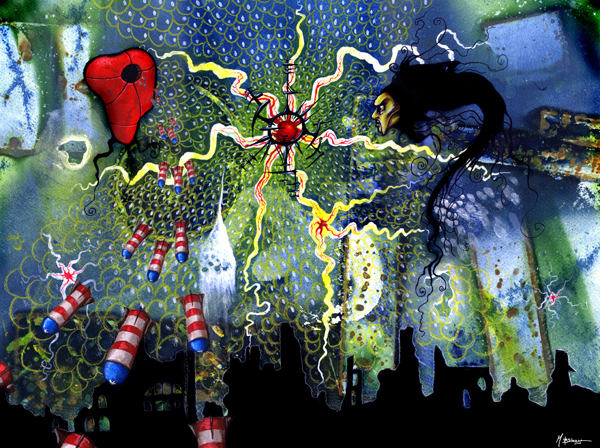 Chasing Ares. 24x18". mixed media on paper. Why do we love to go to war? Why is it a solution? Why do we glorify violence in our movies, video games and music? Shouldn't we try to be a little more than animals living by the law of the jungle? I wanted to point to humankind's struggle with violence. How we say we are against it but our laws and policies only instigate it. This is not pointing at my home country in particular, but as I am only a citizen of this country I feel I only have the right to critique a country that I am a part of. 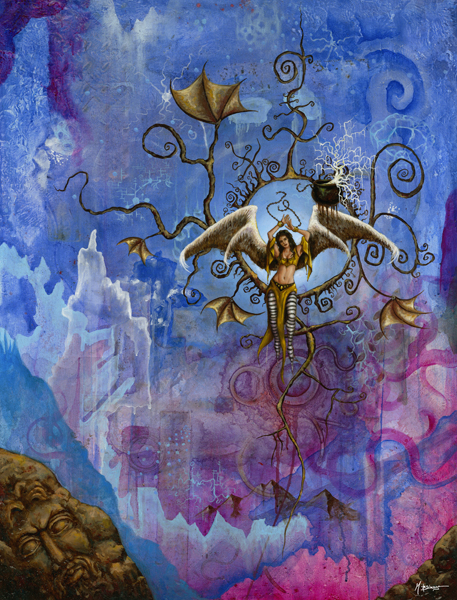 Pandora Unbound. 30x40". oil on canvas. This painting is the companion of Prometheus Unbound, this time critiquing the myths around women. Pandora came to earth and brought a box (or cauldron in the original myth) in which she opened and let loose all the woes on the earth. Here she has broken away from this man-written myth and has the freedom to find her own way. 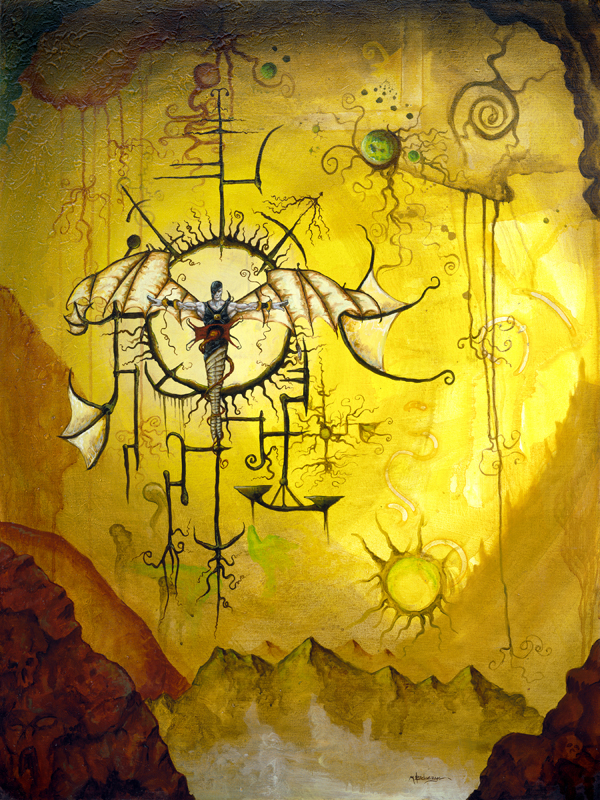 Prometheus Unbound. 30x40". oil on canvas. The inspiration for this piece is our cultures (meaning the United States) view of what is masculine. Being a male who is a non-violence advocate, vegetarian, and feminist, my masculinity often comes into question. I view this as strange that our culture tends to celebrate men who are the opposite of me, those who don’t think, but “Just do it”, those whose first instinct is to solve a problem with violence instead of reason, who think eating a triple thick burger with bacon is what a real man should eat. I contrasted this with the myth of Prometheus, the titan who brought fire, and civilization, to man. For doing this, the head god, Zeus, punished him by having an eagle eat his liver each day. I wanted to picture him having set himself free, breaking the bonds of what was forced on him. A personal touch and personal symbol of mine is the bound legs. I see this as my own dreams, to have such lofty goals that I expect to never have to land again. 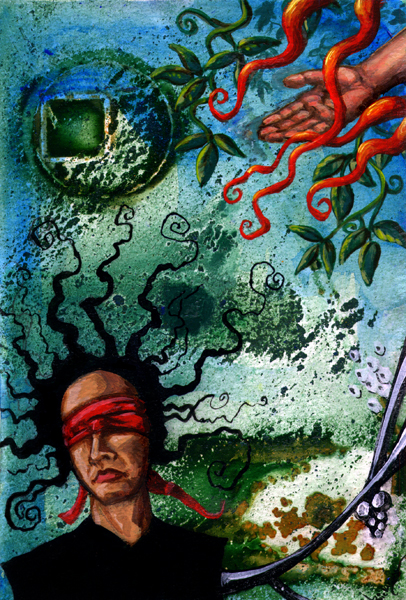 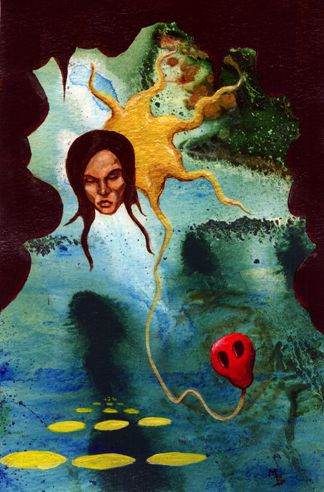 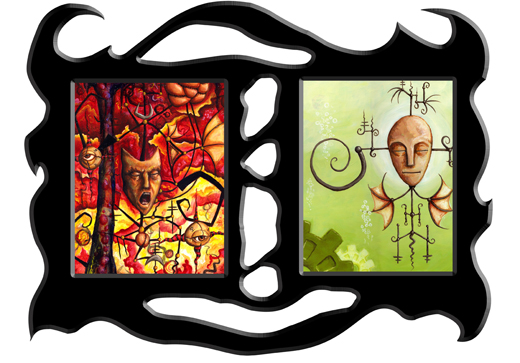 i thought i knew myself. 3x4'. oil on canvas in hand made wooden frame. 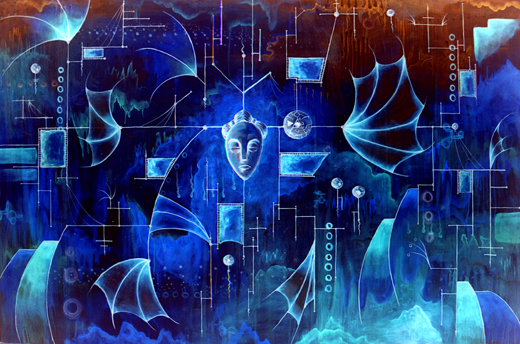 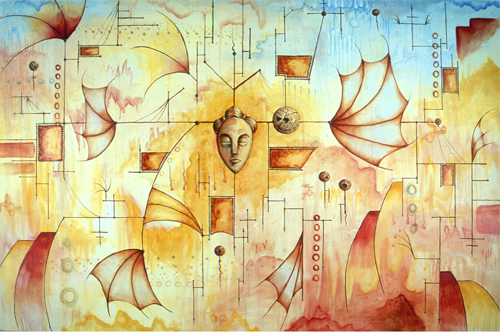 i saw my savior wrapped in leather. 24x9". oil on sewn paper 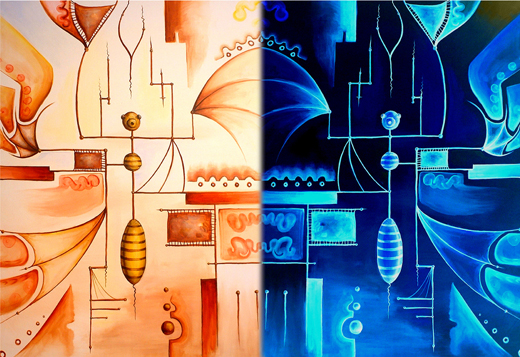 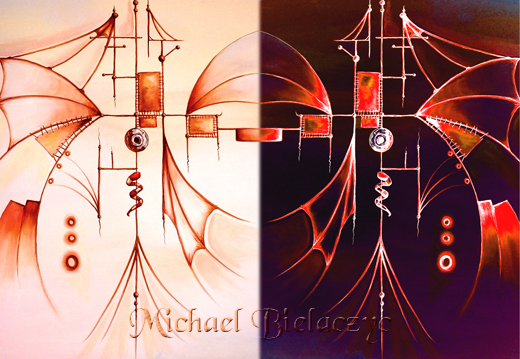